In Bill Pettit’s opinion, the courtyard at Merrill Gardens at The University is one of the best in Seattle. As president of R.D. Merrill Company (parent company of Merrill Gardens), he has seen some of the finest courtyards that are found in senior living communities. Superficially, there isn’t anything noticeably different that distinguishes this courtyard from others:  it has seating areas, a water feature, and planters. Not even the Ionic columns, which symbolize its relationship with the University of Washington, would make this courtyard more special than the others.

The Importance of Connectivity

It’s not the tangible design elements that make this courtyard the best, in Pettit’s mind. It’s the intangible element of connectivity: This courtyard is a gathering place not only for seniors who call Merrill Gardens at The University home, but also the residents of The Corydon, an adjacent apartment complex which houses students, young professionals, and even baby boomers. Petitt says that during the day, the populations mix in the courtyard, allowing relationships to grow between residents of all ages. It’s this connectivity which he sees as an overlooked yet vital component that contributes to a seniors’ well-being. This desire for social connection “will 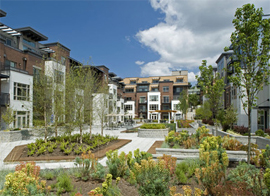 even be more pronounced and meaningful as my generation, the Baby Boomer generation, transition into senior housing alternatives,” Petitt explains, and that “seniors as they age are looking for connections and to maintain connections more than anything else.”

In his opinion, this connectivity wasn’t appreciated or understood when senior living communities were built decades ago. “When Merrill Gardens started building communities 24 years ago, and I think the industry as a whole, a lot of the 1990s’ designs focused on finding an affordable piece of land and rather than looking at trying to create a community that kept seniors connected, typically that affordable land would be off on its own,” he said. “Out of this experience we learned two things, the land might have been cheaper, but you were spending more in marketing trying to get people to the site, and in addition to keeping them connected, we were now transporting them longer distances. The other aspect is what they were turning into was one big island of old age.”

Building a senior living community that wasn’t an island of old age was the vision for Merrill Gardens at The University, which is located near the University Village shopping center and less than half a mile away from the University of Washington Seattle campus. “From the start we had envisioned a gathering place, someplace where [we could] combine seniors with other generations. In some respects we weren’t sure how it was going to work out,” Pettit admitted.

Since the opening of the community in 2009, this new approach has paid off with a waiting list at the community, and families surprised that the surroundings don’t feel like a senior living community when they tour. “All of what we build as a company, and we’re not alone, these are truly residences. All of our units have kitchens,” Pettit says. “Our residents know they have the flexibility if they choose to prepare their own meals but they also have access to our dining room.”

The Design of Connectivity

The incorporation of connectivity is visible in prominent and subtle ways of its design. Walking around the block, and you will find a Yoga studio, restaurants, and shops and the entrance to The Corydon. Once inside Merrill Gardens at The University, “it’s not by accident that all of our common areas are set up with a visual to the courtyard,” he adds. 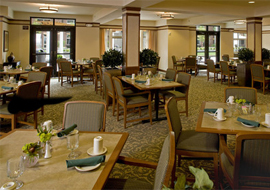 residential apartment building alongside the senior living community also resulted in the unforeseen benefit of helping seniors transition “at their own pace” into Merrill Gardens at The University. Seniors who live in the neighboring apartments can participate in the dining program and activities, and this approach has “worked very effectively,” Pettit says.

With Merrill Gardens at The University having proven that this new approach to connectivity works, Pettit says they are now using this approach at new communities in other Washington State cities including Burien, Kirkland and Auburn, but also future sites in California. We have been actively building for the last 10 years, he says, and we are looking for sites “where the seniors are connected to downtown, where they are connected to be able to walk and step outside the door of the community and be immersed in an intergenerational population, rather than feeling like they have to [be] transport[ed] to it. They are part of it.”

This new approach does have its disadvantages from a financing and construction standpoint; multiple parcels are required to build these larger communities and being located in an urban environment means higher construction costs due to less laydown area for materials. Unfortunately, it also means higher monthly fees to live at the community, but at least in Washington State, there are income-restricted apartments available thanks to tax credits Merrill Garden receives from the state.

With an increasing population of seniors who will eventually move into senior housing, an emphasis on connecting seniors to outside the community and other generations will likely only increase.

“My belief, after all these years in the industry, is the industry needs many solutions,” Pettit shares. “This is a solution which I think appeals more broadly certainly to my generation than to previous generations, and yet I think there are still other alternatives that will continue to evolve and offshoots. But I think the central theme of maintaining connections is very real and very telling about the evolution of senior housing.”